When it comes to pizza, there are some toppings that simply do not belong. Some people continue to argue that pineapple has no place on American pizza. However, there is a new trendy ingredient appearing on top of pizzas across the United States that might make you want to throw up after eating it – or just by simply looking at it in these photos.

Candy corn pizza is a new Halloween trend that has taken social media by storm. The idea of putting the waxy candy corn candy on top of a cheese and sauce pizza initially came from Twitter user @Therealasswolf, who announced, “Tis the season, my dudes,” when sharing images of the disgusting Halloween treat pizza. The viral image showed a frozen pizza before and after being baked with a heavy heaping of candy corn shoveled on top of it before being baked in the oven. 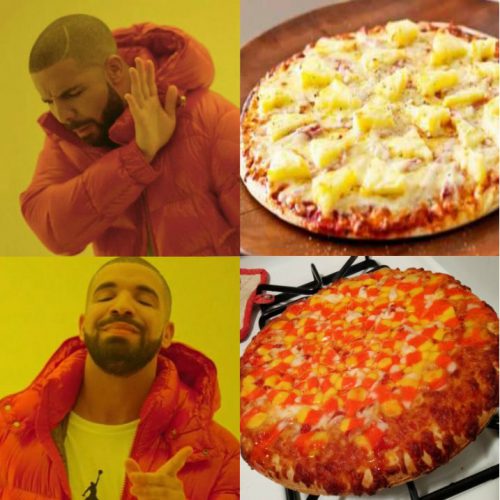 People turned to Twitter to express their disgust at candy corn pizza. Even the DiGiorno frozen pizza brand chimed in to make it clear that they do not condone candy corn on top of their frozen pizzas, writing, “Tis the no.”

Although most people agree that candy corn pizza is something that the United States never had to try, there are some companies that have jumped on the bandwagon. One such place for kids, Chuck E. Cheese, has been serving up its own version of candy corn pizza – without the actual candy corn in fact. Their pizza is cooked in a way so that each slice resembles a piece of candy corn but does not actually taste like an unpopular Halloween treat. 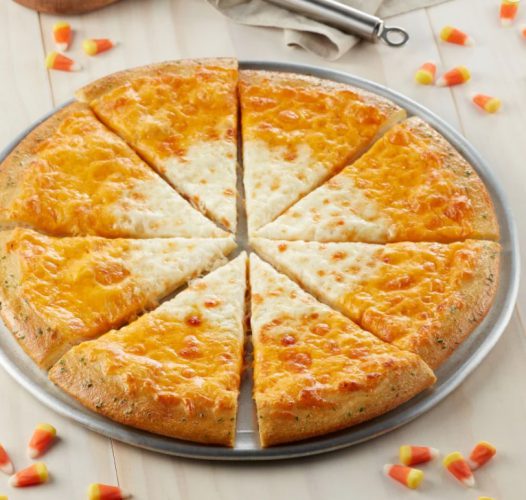 Chuck E. Cheese created its version of candy corn pizza by layering different colored cheeses on top of the pie. The white pizza base helps give the pizza the colors of candy corn without the actual taste of plastic candy. Their white pizza includes garlic mozzarella cheese at the center, along with an orange cheddar cheese ring around the edge. This multi-colored cheese effect makes each slice of the Chuck E. Cheese creation look like a piece of candy corn that you’ll actually want to eat.

The Pizza Pie Café’s candy corn pizza is a dessert pizza that has a sugar cookie crust with a cream cheese frosting. The pizza is then topped with candy corn, giving it the perfect Halloween look.

So, whether you’re a fan of candy corn or not, there’s no denying that this new Halloween pizza trend is one that you have to see – and maybe even try – for yourself. Who knows, you might just be surprised at how good it tastes!

So what do you think? Would you try candy corn pizza?